What they’re watching is changing, though, with long-form becoming increasingly important—something that marketers have noted with interest. 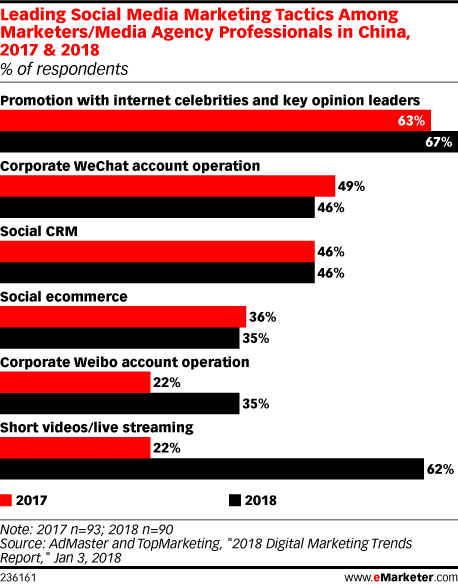 Live streaming and short videos have become a greater focus for marketers and media agency professionals in China over the past year, according to a survey by AdMaster and TopMarketing.

The subscription video space has grown fiercely competitive. Not only are TV networks vying against each other, as they’ve done since the golden age of television, but companies from a wide spectrum of industries—from telecommunications to social media to technology to retail—are also determined to compete.

The high cost of TV service continues to be the most common reason adults in North America have cut the cord, according to TiVo survey data.

A survey of digital marketers worldwide reveals that many are faced with a variety of video advertising concerns, but these issues aren't enough to hinder their investments.

US digital video ad spending will increase at double-digit annual rates through at least 2021, reaching $22.18 billion by that time, or 17.2% of all digital ad spending.

New research shows that YouTube and Facebook are the go-to social platforms for consumers watching video content. And these viewers are most likely to engage with videos that demonstrate relevancy.

In 2018, close to 229 million people in China will watch video via a subscription streaming service that bypasses traditional distribution, according to eMarketer’s first-ever forecast of subscription over-the-top video viewership in the country.

Does Cutting the Cord Really Save Consumers Money? Jan 5

In the latest episode of "Behind the Numbers," eMarketer's Paul Verna, Ezra Palmer and Connor Anovick talk about the various streaming services available, and the various considerations people grapple with when cutting the cord. 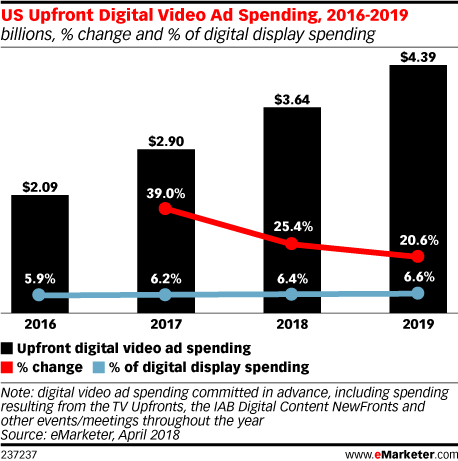 Tallying Digital Video Spending at the Upfronts May 1

The amount of money committed to digital video ads during the US TV Upfronts and Digital NewFronts season will reach $3.64 billion in 2018, according to new estimates from eMarketer.

The Videos That Went Away Apr 25

YouTube has stepped up efforts to remove objectionable content, with millions of videos being pulled from the platform. But how is it making those choices, and how nimble is it about plucking out bad videos? In the latest episode of eMarketer's "Behind the Numbers" podcast, video analyst Paul Verna breaks down the data.

About 60% of the people Penthera surveyed said they’re frustrated with their mobile video viewing experience at least half of the time.

YouTube, Netflix and the Quest for World Domination Mar 12

In the latest episode of "Behind the Numbers," eMarketer's Paul Verna and Oscar Orozco discuss the current state of digital video—who's watching, what are the major local platforms around the world, and is linear TV managing to fend off digital video?

The Shape of Digital Disruption: Oscars TV Ratings Down Mar 6

In the latest episode of "Behind the Numbers," eMarketer analyst Paul Verna discusses the winners and losers from the Academy Awards telecast, including TV ratings, ad rates and streaming video.

This year, 1.87 billion people worldwide will watch digital video via mobile phone at least once per month, up 11.9% over 2017. These individuals will represent more than three-quarters of all digital video viewers.

A recent survey of internet users worldwide by Salesforce showed 81% of respondents watched broadcast TV at least monthly, more than any other format. But there are stark generational differences in the way they consume media, especially video.

Will 2018 be the year of connected TV advertising? Will the number of streaming services continue to grow or start to consolidate? eMarketer analyst Paul Verna discusses key video trends to expect this year in the latest episode of "Behind the Numbers."

Although some streaming services have incorporated ads into their platforms, research shows that advertising is anathema to most consumers watching content.