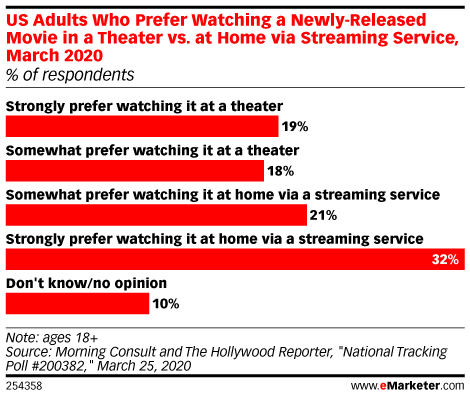 The Future of the Movie Theater Sep 21

eMarketer forecasting analysts Eric Haggstrom and Peter Vahle and vice president of content studio at Insider Intelligence Paul Verna discuss the future of the movie theater. Will movies make a comeback and what will they look like? They then talk about HBO Max with ads, AT&T's possible wireless phone plans subsidized by ads, and Apple One subscription bundles. 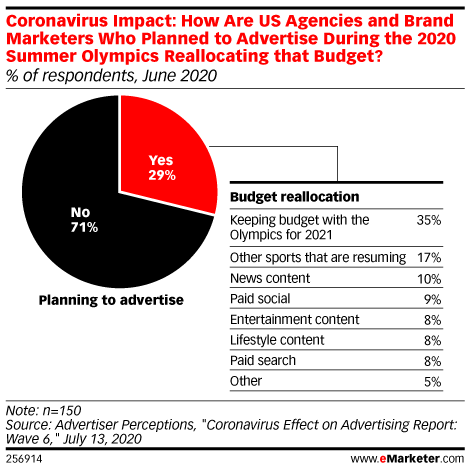 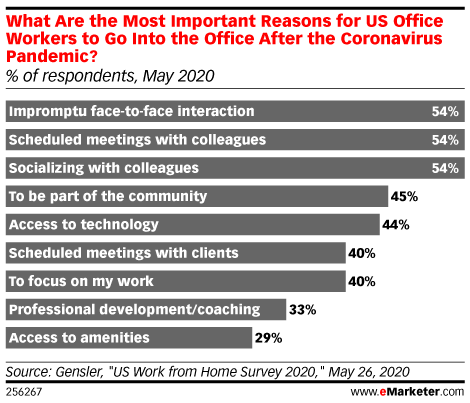 eMarketer principal analyst Mark Dolliver, junior analyst Blake Droesch and vice president of content studio at Insider Intelligence Paul Verna discuss how to recreate those water cooler moments in the digital world, how much Super Bowl LV commercials are going for, watching Instagram Stories on Facebook, parents' more positive view of devices, the number of Facebook Watch viewers, the difference between frugal and cheap, what you didn't notice about that double rainbow, and more. 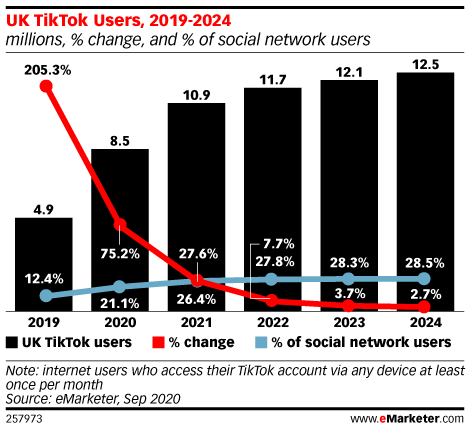 TikTok Sees Major Growth in the UK amid Pandemic Sep 10

TikTok’s future may be uncertain in the US, but its UK operations continue to grow robustly despite security concerns. According to our latest UK social network forecast, the Chinese-owned video platform will have several milestone moments this year and next. 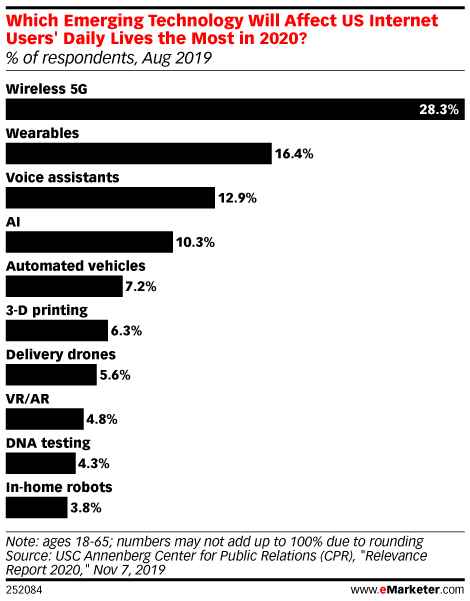 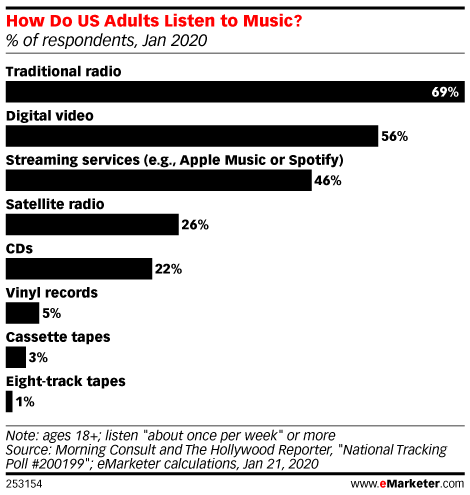 eMarketer senior corporate account director Michael Civins, forecasting analyst Peter Vahle and vice president of content studio at Insider Intelligence Paul Verna discuss which music platforms Americans use and the growing significance of podcast listening. They then talk about whether TV networks are being too optimistic about H2, how many more voice assistants there are and movies going from theaters to digital platforms much faster. 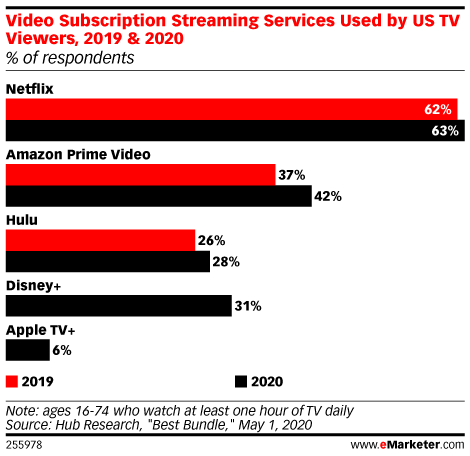 eMarketer analyst Ross Benes, forecasting analyst Eric Haggstrom and senior analyst at Insider Intelligence Audrey Schomer discuss where Disney+ currently slots in the video streaming market. They then talk about whether a free ad-supported tier can save Quibi, the difficulty of deciding what to watch and if Facebook's music video offering will rival YouTube's. 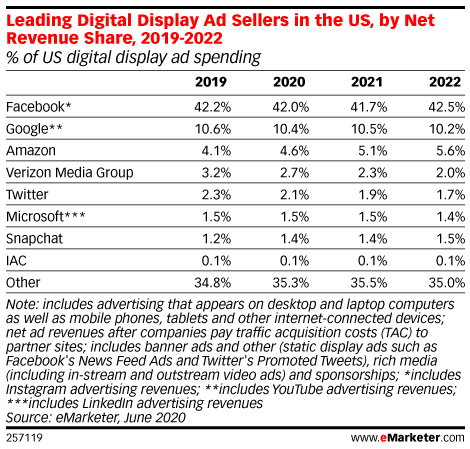 The Weekly Listen: LGBTQ+ in Ads, Paying Media and Will TikTok Get Banned or Bought? Aug 14

eMarketer principal analysts Mark Dolliver and Nicole Perrin and junior analyst at Insider Intelligence Blake Droesch discuss whether TikTok will get banned or bought by someone (like Microsoft), Australia making big tech pay for media, "Prime Gaming," digital revenues exceed print at The New York Times, appealing to the LGBTQ+ community in ads, who gave America it’s most popular chocolate and more. 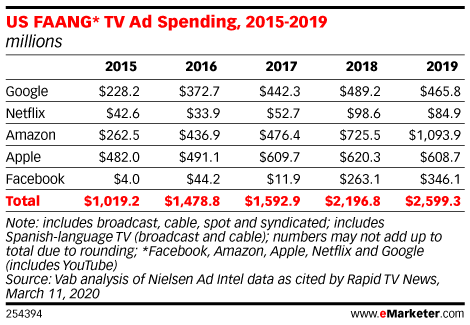 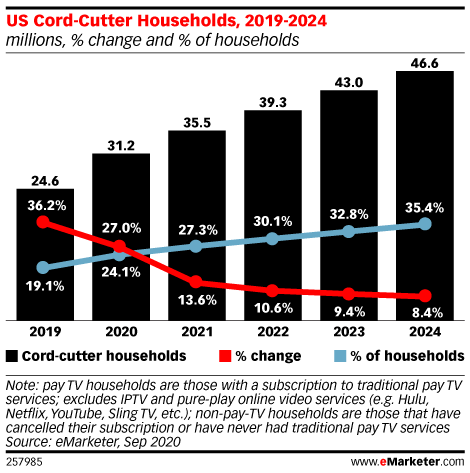 While pandemic-driven lockdowns may have benefited certain forms of media, the traditional pay TV industry is not one of them. In fact, cable, satellite, and telecom TV providers will lose the most subscribers ever. 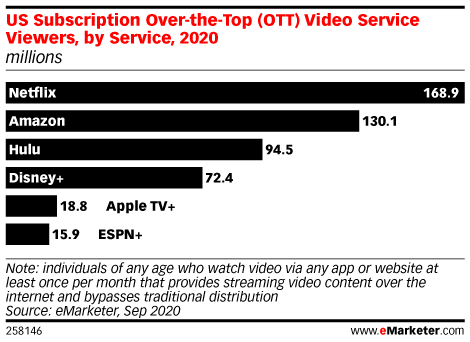 According to our latest estimates for over-the-top (OTT) video services in the US, Disney+ will have 72.4 million users this year, representing 32.1% of OTT viewers. 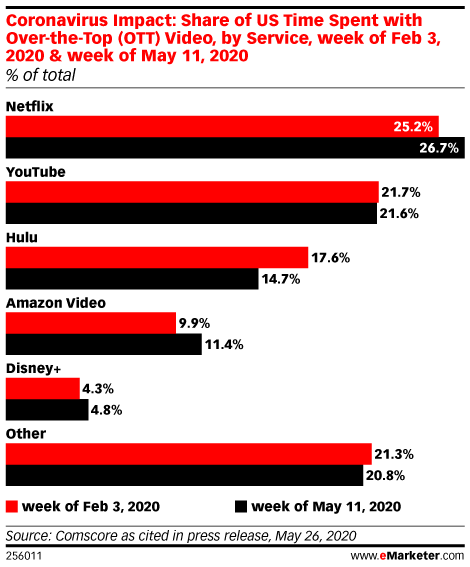 Can Netflix Fight Back Against the Horde of Rivals? Sep 10

Business Insider Intelligence senior analyst Audrey Schomer, eMarketer senior analyst Ross Benes, forecasting analyst Eric Haggstrom, and vice president of content studio at Insider Intelligence Paul Verna discuss the streaming wars. How long can Netflix maintain its lead? What does the future hold for premium video-on-demand? What's the ceiling for Disney+? And what do we think of the new Apple TV+ bundle strategy? 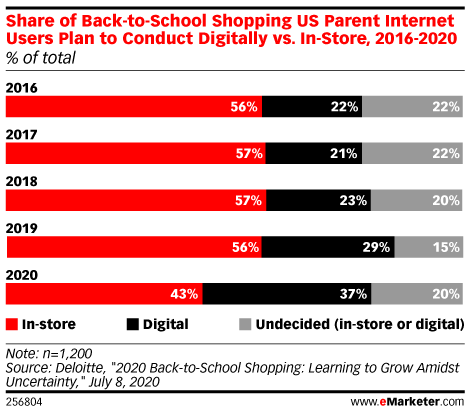 Business Insider Intelligence research analyst Daniel Keyes, eMarketer principal analyst Andrew Lipsman and senior forecasting analyst at Insider Intelligence Cindy Liu discuss how a staggered back-to-school shopping season is changing consumer spending and advertising. They then talk about why Walmart has teamed up with Microsoft to bid for TikTok, and what Walmart's membership program launch means for Amazon Prime. 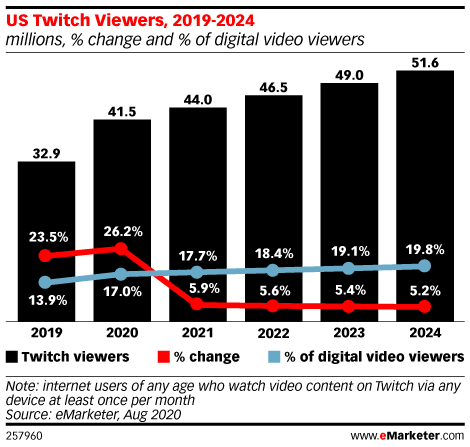 Video viewing platform Twitch is benefiting from coronavirus lockdowns in a big way in the US. Usage will jump 26.2% this year to 41.5 million, higher than the 37.5 million predicted in February.

The Weekly Listen: TikTok Sues the US, Simultaneous Media Usage and Cord-Cutting Aug 28

eMarketer principal analyst Mark Dolliver, junior analyst Blake Droesch and forecasting analyst at Insider Intelligence Peter Vahle discuss the implications of TikTok suing the US government, smartphone use while watching TV, a potential new tech agency, Instagram's new "Suggested Posts," the status of cord-cutting, how you can tell the temperature by counting cricket chirps and more. 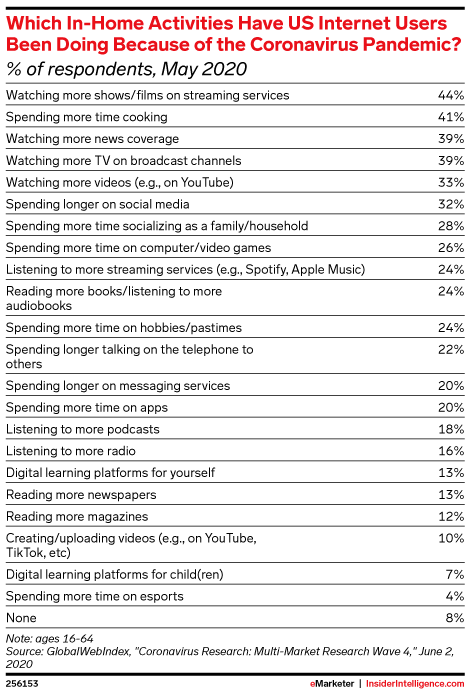 The Pandemic Presents an Opportunity for Esports Viewership Aug 26

Esports viewership has not caught up to the media hype – but there could be upcoming growth opportunities. 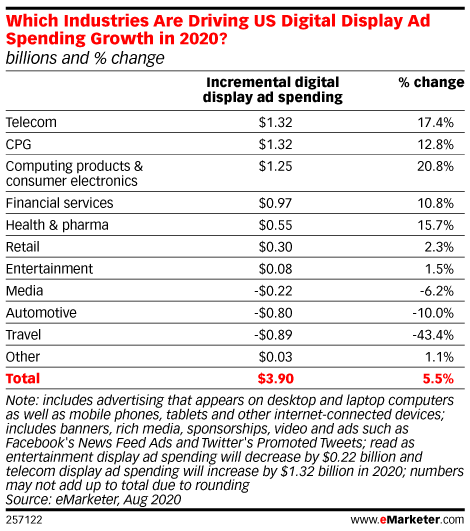 While the overall economy has suffered from pandemic-necessitated behavioral changes, some industries have been hit harder than others. We estimate that US retail sales will decline by 10.5% this year, and even though the shift to ecommerce will accelerate digital sales to new heights, retailers will grow their US digital display ad spending by only a sluggish 2.3% this year. 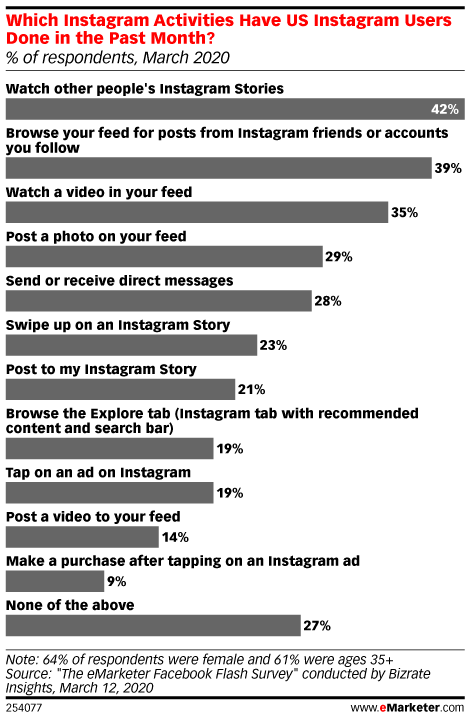 eMarketer principal analyst Debra Aho Williamson and junior analyst at Insider Intelligence Blake Droesch discuss whether Instagram's "Reels" feature can steal users from TikTok. They then talk about whether Twitter might buy TikTok, the Federal Trade Commission's potential Twitter fine and a new study about how young consumers engage with premium video.