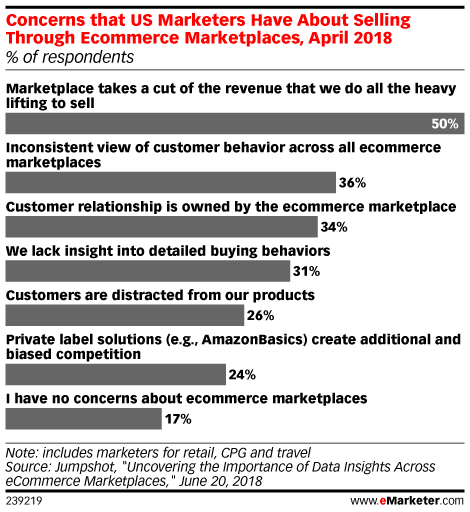 Amazon's marketplace sales not only have leapfrogged its direct sales business, but marketplace growth is significantly outstripping that of direct operations, which means the gap between marketplace and direct will grow larger in coming years. 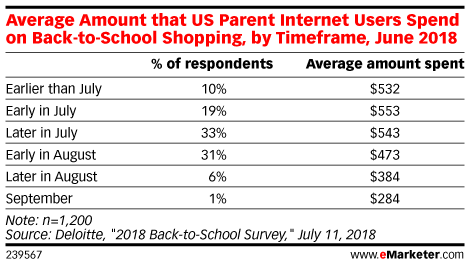 A recent Deloitte survey found that parents who start their back-to-school shopping in June and July spend considerably more than those who wait until closer to summer’s end. 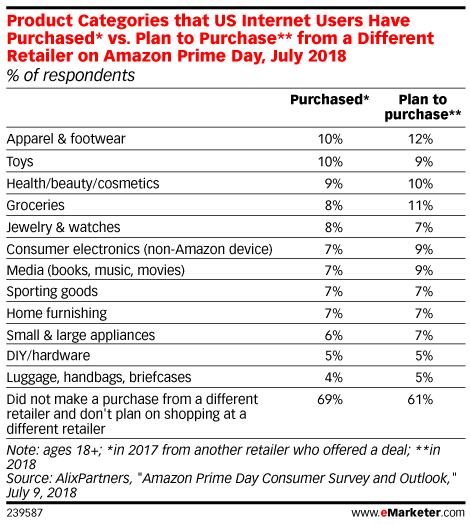 Prime Day Is Becoming a Shopping Event for Retailers Jul 16

Amazon Prime Day has become bigger and bolder since its 2015 inception. The shopping event has also taken on a life of its own, prompting other retailers to offer competing sales even if they never make mention of Prime Day specifically. According to RetailMeNot, the number of retailers offering Prime Day deals on its platform rose from 27 in 2016 to 119 in 2017, and 54% planned to hold sales during this year's event. 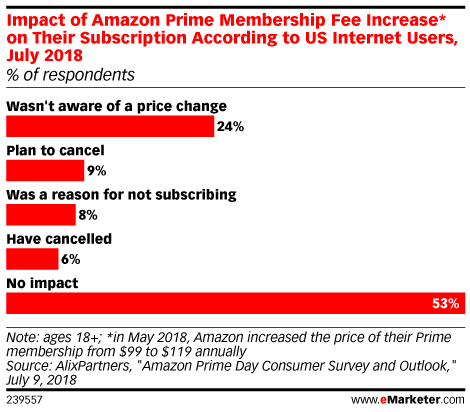 How much of an impact has Amazon's annual Prime membership increase really had on consumers? Not that much, according to a recent survey from AlixPartners, which polled 1,124 US internet users in July. 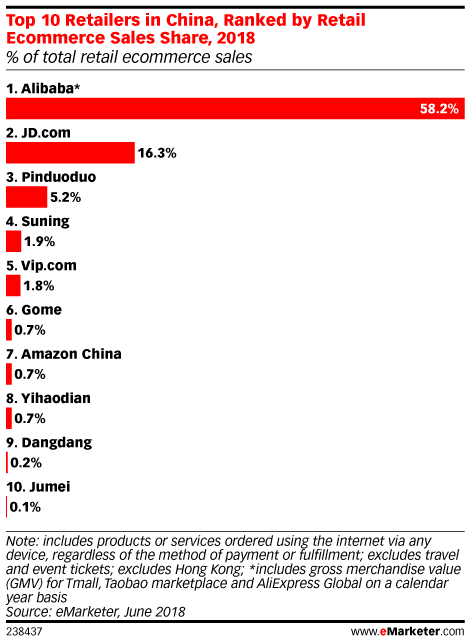 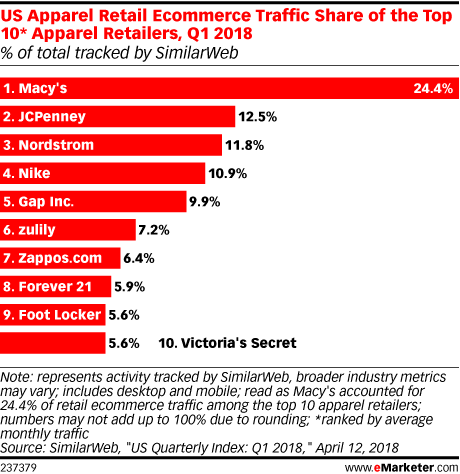 Shoppers Love Low Prices, but What Else? Jul 11

Multiple studies have shown price plays a strong role in shopping decisions. It's why dollar stores have thrived for the past decade and why many consumers choose to shop online instead of in-store. Still, for many brands, there is a risk in being perceived too strongly for value. 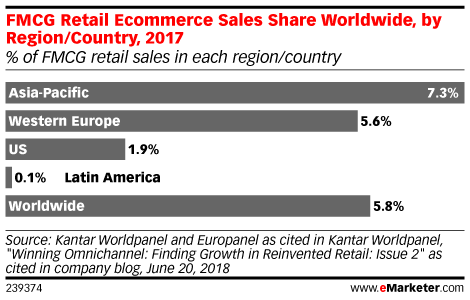 According to Kantar Worldpanel, US online sales of fast-moving consumer goods (excluding fresh food) jumped 29% in 2017 to $20 billion. But part of the reason for the rapid growth is that the US has a lower FMCG ecommerce penetration rate than most other geographic regions. 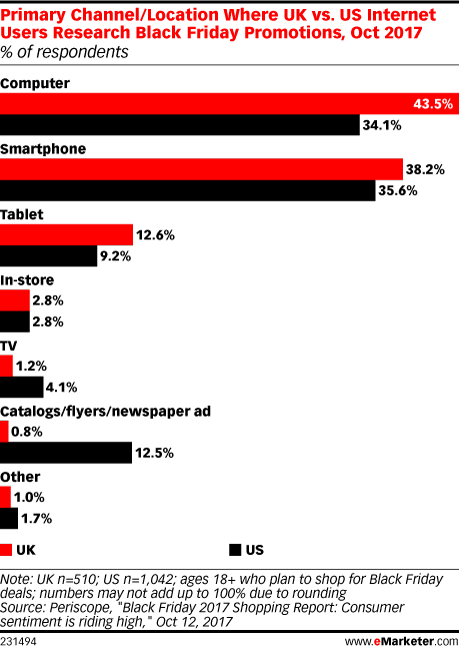 The once online-only merchant is planning to launch a holiday toy catalog this year, stepping in to fill the role that used to belong to Toys "R" Us, which produced its "Big Book" catalog every year. But what may seem like an off-brand move isn't that unusual. 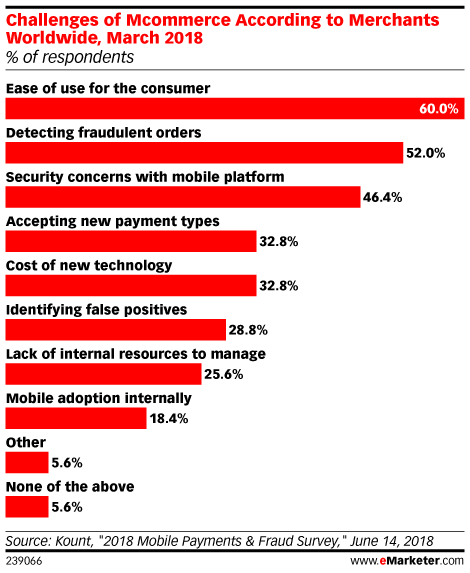 For Many Merchants, Mobile Commerce Is a Challenge  Jul 2

Mobile commerce isn’t always synonymous with user-friendly. And for merchants trying to engage consumers on their devices, that’s a pressing concern. 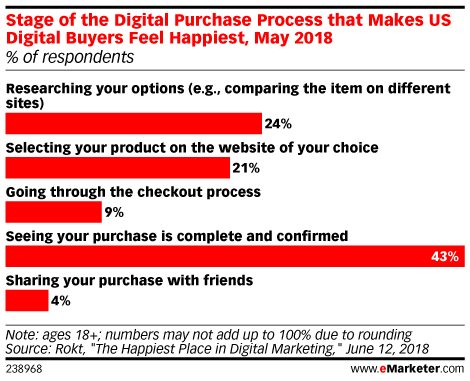 A recent survey by Rokt found that US digital buyers are happiest once the buying experience is over. Going through the checkout process is another story. 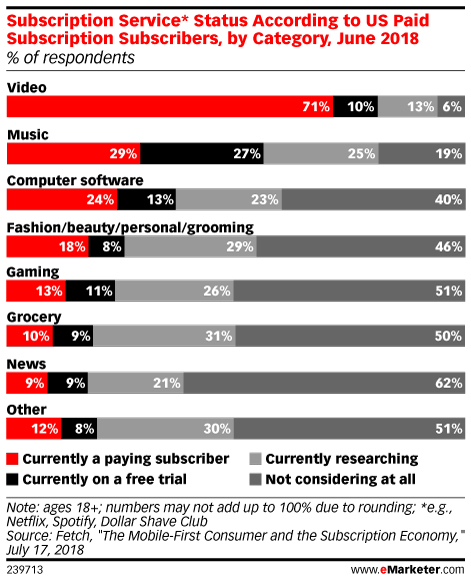 How Many Subscriptions Can Consumers Take?  Jul 19

Media subscription services for video, music and software are widespread, and some subscription box services have struggled. But new survey data suggests shoppers are still looking into subscriptions in categories like food and fashion. 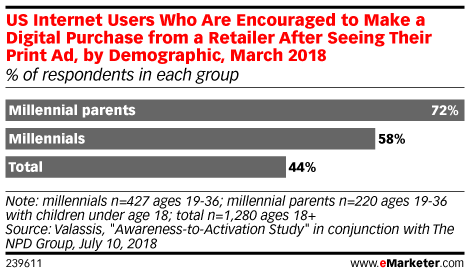 Consumers are always on the lookout for a good deal. In fact, many look for coupons during different stages of the shopping process, whether it's something they planned to buy, something they didn't intend to by, or even a coupon that "planted a seed" in them to shop, according to a March 2018 survey from Valassis. 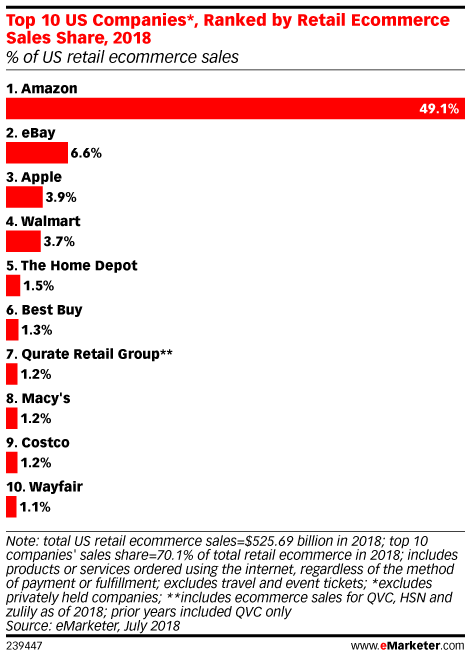 Amazon Now Has Nearly 50% of US Ecommerce Market Jul 16

When it comes to the US ecommerce market, Amazon is leaving the competition in the dust. This year, the online shopping juggernaut will capture 49.1% of the market, according to eMarketer’s latest forecast on the top 10 US ecommerce retailers, up from a 43.5% share last year. 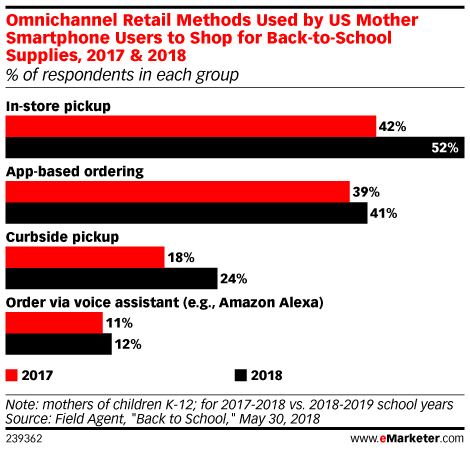 Armed with a lengthy list of needed school supplies, US mothers are upping their omnichannel approach for the back-to-school season, according to a new survey. 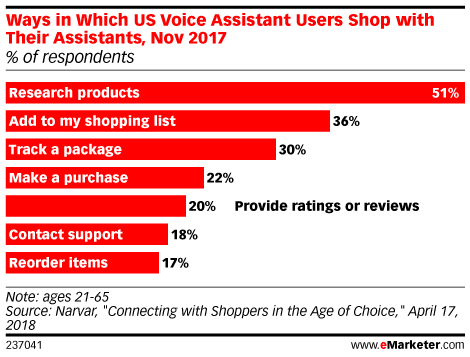 Amid rising ownership of voice assistants and smart speakers like Amazon’s Echo and Google’s Home, voice search is becoming standard operating procedure for many consumers. eMarketer has curated this Roundup of articles, insights and interviews to help you understand the conversational commerce ecosystem, encompassing chatbots and personal assistants. 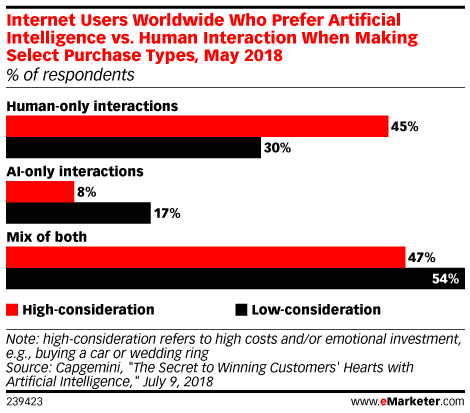 Shoppers Prefer a Mix of Human and AI Assistance Jul 10

Consumers still have some reservations about retail tech—like chatbots providing customer service or in-home voice assistants suggesting products—so it makes sense that many are more receptive to a combination of AI-assisted and human interactions. But transparency is key: Shoppers want to know if they’re dealing with a human or a computer. 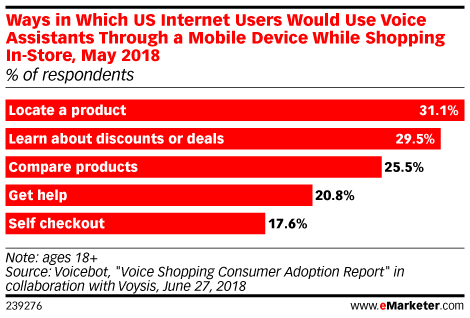 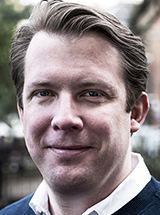 Treat Yourself: Why Luxury Brands Need to Pay Attention to the Sporadic Shopper Jul 3

Ben Whattam, managing and founding partner of Keko London, explains why luxury brands have to break the mold of traditional marketing.

Amazon Will Drive 80% of Ecommerce Growth this Year Jul 2

With Amazon Prime Day looming, retailers and marketers are prepping their strategies for what’s turned into a new midyear shopping holiday in the three short years since its debut. The latest eMarketer forecast shows that Amazon continues to set the pace for US retail ecommerce. 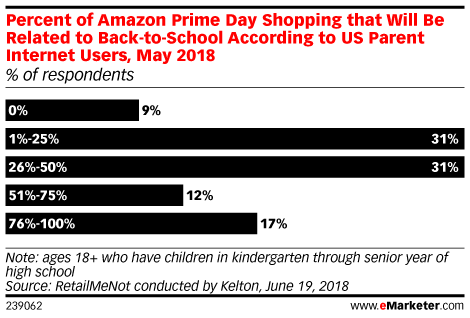 This July will mark the fourth annual Amazon Prime Day, hardly a deep-seated tradition, even though the online shopping event grows in popularity every year. In 2017, sales reached an estimated $1 billion. Prime Day is also starting to capture dollars spent historically during a more established shopping season: back-to-school.