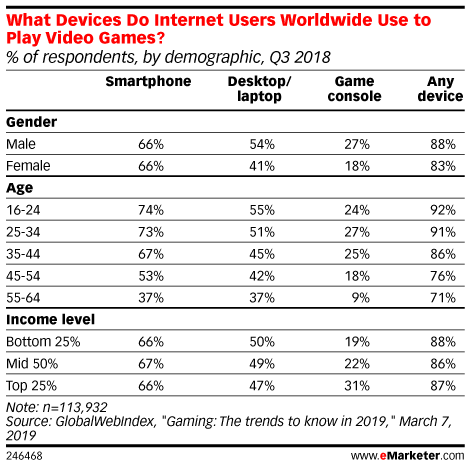 Gaming has gone mainstream, with 86% of internet users worldwide noting they have gamed on at least one device within the past month, and that figure climbed to 92% among those ages 16 to 24, according to a March 2019 report from GlobalWebIndex.

Apple Music Continues to Grow, Should Marketers Be Worried? Mar 29

Apple Music will gain an additional 5 million monthly active users (MAUs) in the US this year, reaching a total of 33.4 million. We expect the streaming service will continue to grow and take an 18.3% share of US digital audio MAUs by 2021.

Amazon Music will cross 35 million monthly listeners in the US this year. At a growth rate of 17.7% year over year, we expect it will grow faster than any other digital audio service in our forecast.

In the latest episode of "Behind the Numbers," eMarketer principal analyst Paul Verna helps us understand whether advertisers are overlooking engagement across devices as dollars move from TV to digital video.

Competitive video gaming is a rapidly growing, multibillion-dollar industry, presenting new opportunities for marketers to reach and engage with fans. Esports ad revenues are poised to surpass $200 million by next year, according to eMarketer’s first forecast on esports and gaming revenues.

Earlier this week, 3,000 marketing industry professionals gathered for LiveRamp’s RampUp conference at the Fairmont Hotel in San Francisco to discuss the latest marketing technology developments. One theme that stood out was that while marketers are making headway with advanced TV, it’s early days with TV ad innovations.

How Forbes Is Digitally Transforming Itself Feb 21

Revamping a century-old business magazine is like changing car tires at 100 mph, according to Salah Zalatimo, chief digital officer at Forbes. Like a Nascar pit crew, the team responsible for transforming a company like Forbes has to work quickly and precisely.

Want to Understand the Evolution of TV Ad Measurement? Mark May 20 on Your Calendar Feb 12

That’s the date the International Bureau of Weights and Measures has designated as the transition to a new definition of the kilogram. What does the kilogram have to do with TV ad measurement? It illustrates the need to update old standards to reflect new technologies and user behaviors.

Data privacy battles are heating up now that a group of US senators are asking regulators to investigate how telecom firms are selling people's location data. 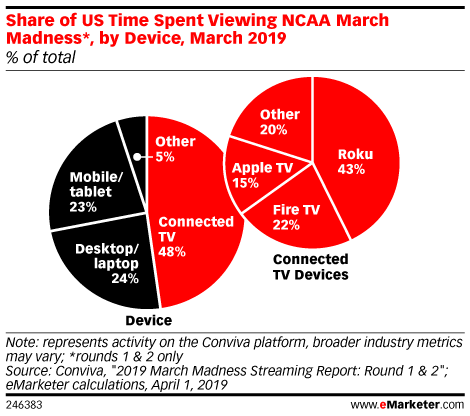 Podcast | Hoop Streams: How March Madness Plays Out on TV and Video Apr 11

In the latest episode of "Behind the Numbers," eMarketer principal analyst Paul Verna talks about March Madness and the NCAA men’s and women’s basketball tournaments. He explains who's watching, how they're watching, and how much advertisers are dropping on the Final Four event.

More than 35 million Americans are enhancing their social media experiences with augmented reality (AR), according to our estimates. In today’s “eMarketer Daily Forecast,” forecasting analyst Showmik Podder provides a quick look at AR usage among US social network users. Tune in.

How Apple Is Expanding Its Media Business Mar 27

Spotify to Surpass Pandora Listeners by 2021, Sooner Than Expected Mar 24

Pandora may be the most popular music streaming service in the US, but it won’t retain the No. 1 spot for much longer. According to our latest forecast on digital music listeners, Spotify will surpass Pandora in terms of users by 2021—one year sooner than we predicted last year.

In the latest episode of "Behind the Numbers," we take a look at the Academy Awards show, which reversed a string of audience losses even as it jettisoned a traditional hosting role. Who was watching, why, and how does digital intersect with the Oscars?

In the latest episode of "Behind the Numbers," we look at the state of augmented reality today and what the future may hold. Will AR largely be a smartphone function, or will other devices come into play?

Podcast | For the Grammy Awards, a Struggle for Relevance Feb 12

In the latest episode of "Behind the Numbers," we're digging into the data behind the Grammy Awards. What do the audience trends suggest for the future? How are shifting TV audience trends affecting the awards show and are political controversies driving interest or leading viewers to opt out?