In China, Adults Spend Half Their Media Time Online Jun 7

This year, for the first time, adults in China will spend over half of their daily media time on the internet. This is largely a result of increased government efforts to transform and develop internet infrastructure in the more rural parts of the country. 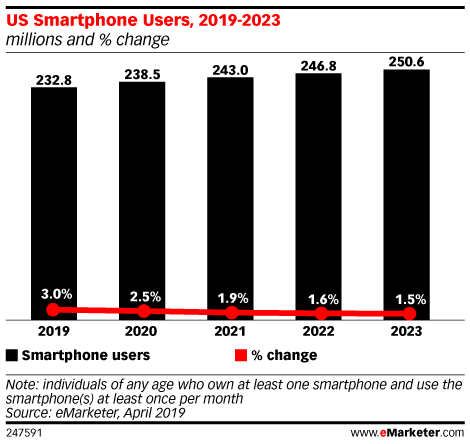 As the US smartphone market decelerates, Apple and Best Buy have been experiencing slower sales growth, and we forecast that the number of smartphone users will grow just 3.0% in 2019.

Thousands of new shopping apps continue to pop up in Apple’s App Store and the Google Play store each year as consumers gear their shopping habits towards mobile. But the increase in competition might be causing smaller retailers and startups to think twice about investing in app development, especially on the iOS marketplace.

Podcast | How Smartphones Are Changing Banking May 20

In today’s episode, we spotlight mobile banking in Asia. How are young entrepreneurs in China using their smartphones to disrupt the financial services industry? What is South Korea doing to make banking fun? What new apps are teaching children how to manage their money? And what do bankers need to know about the mobile generation?

Daily Forecast: US Tablet Time Continues to Drop May 16

Daily Forecast: UK Smartphone Video Use Keeps Going Up May 7

Fewer people in the US are accessing social networking sites via computers, with the majority of users now exclusively on mobile devices. We forecast that 51.7% of US social network users will be mobile-only in 2019.

In today’s “eMarketer Daily Forecast” video, forecasting director Shelleen Shum explores how many Americans only use their phone, and nothing else, to browse the internet. Watch now.

Gaming has gone mainstream, with 86% of internet users worldwide noting they have gamed on at least one device within the past month, and that figure climbed to 92% among those ages 16 to 24, according to a March 2019 report from GlobalWebIndex.

Daily Forecast: iPhone Is Expected to Continue Growing Share in US Apr 10

In today's "eMarketer Daily Forecast," forecasting analyst Showmik Podder provides a quick look at iPhone usage in the US. Tune in.

Podcast | What’s Up with WhatsApp? Jun 4

eMarketer senior analyst Jasmine Enberg examines the implications of WhatsApp’s latest strategic moves, including its decision to launch an ad platform in 2020 and a mobile payments system in India.

For the first time ever, US consumers will spend more time using their mobile devices than they will spend watching TV, with smartphone use dominating that time spent.

eMarketer forecasting director Shelleen Shum dives into our internet and mobile usage numbers in India and weighs in on the country's promising growth. Watch now.

In this Meet the Analyst Webinar, eMarketer principal analyst Yoram Wurmser discusses how location data and consumer attitudes toward its use have evolved over the past year.

According to a March 2019 RetailMeNot study, internet users looking for more information in-store often skip approaching retail associates and go directly to their smartphones. Sixty-nine percent of respondents said they would look for reviews on their phone first, and 53% would search for deals before speaking with an employee.

Facebook’s Cambridge Analytica scandal changed the way Americans think about online privacy. And it should come as no surprise that many have grown wary over the mishandling of personal information.

Native advertising has dominated the digital display market, and it can be the main (or even exclusive) way of reaching consumers with display ads. Native ads have a particularly strong foothold in mobile apps, which account for a significant share of how internet users spend their time.

US Parents Get Digital After Dark Apr 15

After their kids are tucked in, 71% of mothers and 60% of fathers use social media; 66% of mothers and 53% of fathers said they talk on the phone or text. Moms are more likely than dads to use this time for interaction with people outside of the household, according to an August 2018 survey by Brigham Young University and Deseret News.

Retailers Are Interested in, but Wary of, Location-Based Marketing  Apr 11

For retailers considering an investment in emerging technologies, location-based marketing stands out as a key area of interest.

Mobile Web vs. Mobile App: Where Do Shoppers Spend Time and Money? Apr 7