eMarketer junior forecasting analyst Brian Lau breaks down our recently adjusted retail sales estimates, as well as an outlook into 2023. 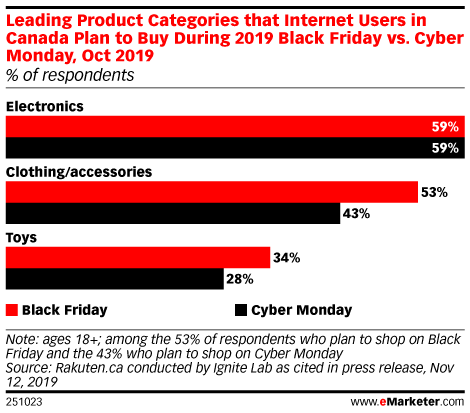 Since Instagram rolled out its Checkout feature earlier this year, brands have begun linking influencer content to shopping tools as a way to drive—and measure—direct sales. Should the platform hide likes from public view, which it began testing in the US this week, influencer marketers could be forced to look beyond vanity metrics to more advanced measurement tools, including social commerce and in-store purchase behavior.

Have We Changed Our Social Media Behavior? Nov 12

A pioneer in smart card technology, France was the first country worldwide to introduce chip-and-PIN payment cards. Now, contactless cards are also widely available, but that has held back adoption of mobile payment alternatives.

Peer-to-peer (P2P) payments are increasing significantly in the US, driven by tremendous growth from Venmo and Zelle. eMarketer’s latest estimates show that P2P mobile transactions will total $309.95 billion this year, growing 27.9% to hit $396.48 billion in 2020. 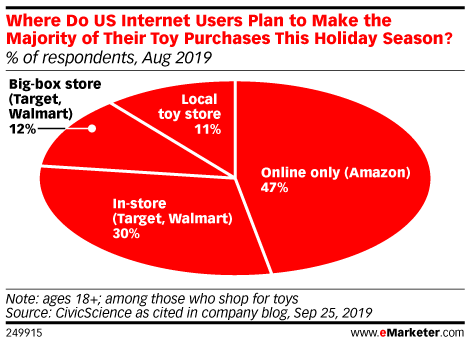 Why Target Is Optimistic About the Holiday Season, but Other Retailers Shouldn't Be Nov 25

Last Wednesday, Target announced another stellar earnings report that crushed expectations on the top and bottom lines and raised Q4 guidance, causing the stock to pop 14% and CNBC’s Jim Cramer to crow about what it signifies about the health of the US consumer. While there’s a kernel of truth to this, Target’s recent success and near-term optimism has more to do with what the retailer is doing right and less about tailwinds in the consumer economy, especially during the holiday season. 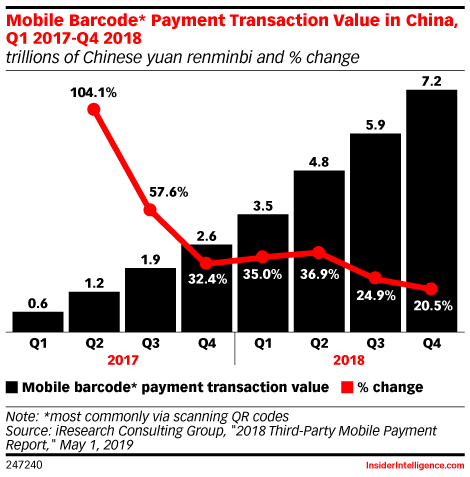 China Is Moving Toward a Cashless Society  Nov 25

In 2019, we estimate that 577.4 million people in China made a purchase via proximity mobile payment within a six-month period. Those users account for 49.6% of the country’s population. Next year, more than half of the population will utilize this payment method, with that figure rising to 60.5% in 2023.

UPS is anticipating a surge of returns this holiday season, leading into the new year. According to the company, 1.6 million packages are expected to be returned daily the week of December 16 leading into Christmas. And a record-breaking 1.9 million returns are expected to take place on this year’s peak returns day—January 2—up 26% over last year.

One of the biggest drivers for proximity mobile payment growth is the ever-expanding footprint of stores accepting payments. According to Apple, 74 of the top 100 retail chains accepted Apple Pay as of January 2019, and more have joined since then.

Female Shoppers Are Getting More Comfortable with Secondhand Fashion Nov 18

More women are turning to resale sites, including The RealReal and Poshmark, as they continue to compare deals and make more of an effort to spend less.

eMarketer junior forecasting analyst Nazmul Islam and principal analyst Andrew Lipsman tell us the likelihood that your food delivery driver has eaten some of your meal. How are people using food delivery apps, and how can they make the unit economics work for everyone?

As with video viewing, digital technology has taken a large role in teens’ shopping without altogether replacing older methods. We estimate that 61.8% of 14- to 17-year-olds in the US will be digital buyers next year. Though substantial, that’s lower than the penetration rates of all other age groups younger than 65.

Despite healthy consumer spending overall in 2019, the upcoming holiday season will be affected by economic uncertainty and a shorter timeframe. (This year has six fewer days between Thanksgiving and Christmas than in 2018.)

How D2C Brands Are Managing the Holiday Season Dynamics  Nov 4

As some traditional brands and retailers flounder, a host of direct-to-consumer (D2C) brands have risen to capture US shoppers’ imagination—and an increasing share of their wallets. Many of these challenger brands haven’t yet leaned into holiday marketing like their established counterparts. But with continued business momentum, the ability to make marketing investments and expanded physical presences, this year should see additional emphasis.